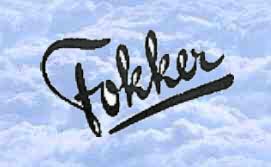 Back to the main menu

Fokker: the man and the company

Anthony Herman Gerard Fokker, or Tonny for short, was born on April 6, 1890, in Blitar. It was a small town on Eastern Java in the Dutch East Indies, now Indonesia, where his father Herman Fokker had made a fortune growing coffee.

When Tonny was four, the family returned to Holland to settle in the city of Haarlem, close to Amsterdam. Young Tony turned out to be not much of a student. Rather than "wasting" his time with books, as he called it, he liked to work with his hands. When he was still in his teens, this led to his "invention" of a puncture-proof tyre. Sadly for him, when he tried to get the tyre patented it turned out a Frenchman had beaten him to it.

In a desperate attempt to steer his son away from a growing interest in aviation, Herman Fokker sent Tonny to a technical college in Bingen, Germany, dedicated mainly to motor-cars. Tonny discovered that a nearby college offered courses in aviation as well. Omitting that particular fact from a letter to his father, Tonny managed to convince him that this college in Salbach was a much better choice. However, Tonny, now twenty years old, would soon find out that in those early days even the experts knew next to nothing about aviation. Trial and error was very much the way to go.

And so he did. After their teacher had wrecked his pupils' first assignment on its maiden flight, Tonny and a fellow-student built two aircraft that would leave the ground just well enough for this fellow-student to park them in a nearby orchard. Like its predecessors, Fokker's third aircraft was called the Spin (Dutch for Spider) because of its great many bracing wires. Unlike them, it was a resounding success. It enabled him to perform breath-taking stunts all over Germany and make some money in the process.

It must have delighted his father. During the development of the subsequent Spider models the family had seen little of their son other than a stream of letters, pleading for more funds. Now that "their boy had made it", Herman Fokker asked his son to show off his skills in their home town. And so it was that on August 31, 1911, during the annual celebration of the Queen's Birthday, Anthony Fokker circled the tower of Haarlem's St. Bavo church to wide acclaim. Later he would call it the proudest moment of his life.

Back in Germany he founded the Fokker Aeroplanbau, later called Fokker Aviatik GmbH. It remained a marginal affair, that survived on a mix of giving flying lessons and demonstrations, with only a handful of actual sales thrown in every now and then. That is, until the outbreak of the First World War saw a skyrocketing demand for his technically outstanding aircraft. An English MP coined the tell-tale phrase "Fokker fodder" to describe the Allied pilots' fate and Von Richthofen's immortal name is inextricably linked to that of Fokker. When accused of choosing the wrong side, Fokker always pointed to the fact that before the war both Great Britain and Holland had turned down the planes he had offered them.

At the end of the war, Fokker managed to escape to Holland with part of the immense fortune he had made and with hundreds of his planes the peace treaty had ordered be destroyed. He was accompanied by his fiancee Sophie Marie Elisabeth von Morgen, whom he married on March 25, 1919. Tetta, as he called her, would soon discover that Fokker was hard to live with, focused as he was on his aircraft and his business, and their marriage was dissolved after four years.

Apart from a technical talent, Fokker was also a shrewd opportunist, so with the outbreak of peace, his attention turned to civil aviation. On July 21, 1919 he founded the N.V. Nederlandsche Vliegtuigenfabriek (Dutch Aircraft Company), careful not to use the name Fokker, and less than a year later he presented the F. II, one of the world's first aircraft specifically designed to carry passengers, to KLM Royal Dutch Airlines.

By the way, this was not as simple as it might sound, because the prototype had been built in what was left of Fokker's German factory and was not allowed to leave the country. Bernard de Waal, close friend of Fokker, went there and managed to take off directly from the hangar. Close to the border engine trouble forced him down twice. De Waal managed to convince a policeman, waiting for further instructions, that in the meantime the engine had to be tested. The man helped swing the propeller and was rewarded with a grateful wave from De Waal, who immediately took off. The third and final engine failure took place over Holland and the aircraft was further transported by boat.

It almost makes you wonder why, but KLM bought two of the aircraft. It was the inauspicious beginning of an era of some fifteen years, in which Fokker built numerous civil aircraft of so-called mixed construction, using welded steel tubing, plywood and linen.

Always seeking new opportunities, Fokker first visited the United States in 1920 and immediately founded the "Netherlands Aircraft Manufacturing Company of Amsterdam" in New York. Despite its grand name it was just a sales office, until in 1923 he renamed it Fokker Aircraft Corporation and its new-found daughter company, the Atlantic Aircraft Corporation, began producing aircraft. First they were little more than copies of their Dutch-built originals, but the 1925 debut of the Fokker Universal marked the beginning of a series of American originals.

Interestingly, Fokker was encouraged to set up production facilities by none other than Billy Mitchell, the visionary who was so far ahead of his time that it got him court-martialled in 1925. Seeing his country lagging behind Europe in aviation, he gave Fokker the order to modernize a large number of D.H. 4 biplanes in the hope that that would stimulate developments.

In July of 1927, Fokker married Violet Eastman. Apparently an unstable character to begin with, her complete disillusionment about the marriage led her to leap to her death from their Manhattan appartment on February 8, 1929. Fokker, in the Dutch version of his autobiography, admitted somewhat sadly to his inability to communicate and love.

In the late Twenties, Fokker was at the pinnacle of his success. His aircraft made the headlines all over the world, his Dutch and American companies were swamped with orders and in a great number of other countries, his designs were built under license. But the downside of his success would almost ruin him in the Thirties.

Much against his nature, Fokker was forced to raise new capital for his ever expanding American operations by selling stock. He lost control of his company, now called Fokker Aircraft Corporation of America, first to major customer Western Air Express and in 1929 to General Motors, after which it was incorporated into their General Aviation Corporation. Fokker was appointed its Director of Engineering.

In a thunderstorm, an F. 10a carrying famous Notre Dame University football coach Knute Rockne broke apart and crashed in March 1931. His death shook public confidence in aviation and even though technically speaking this was a freak accident, the only remedy the airlines could think of was to replace their Fokker aircraft. As a consequence, relations between General Aviation Corporation management and their Director of Engineering, already strained because Fokker was never one to play second fiddle, reached a new low. On July 10, 1931 he resigned. General Aviation Corporation retained the right to use the name Fokker, but never did, and effectively it was the end of Fokker's brief but major role in American aviation.

Meanwhile in Europe, his Dutch company was beginning to feel the effects of the Depression. Worse, always out for quick results and blinded by his success so far, he had failed to see the need for long-term planning and investment. In fact, he spent more money on his private yacht than he ever did on the development of aircraft. Inevitably the result was that, while admittedly his yacht looked way ahead of its time, his planes were beginning to look outdated with the coming of all-metal aircraft like the Boeing 247 and Douglas DC-2.

Fokker had relied on his proven mixed construction too long to be able to make a swift transition to the new techniques. The dramatic result was that, in 1934, the company was forced to discontinue the production of airliners. Fokker realized there was only one thing he could do to keep in civil aviation. In a brilliant coup, just before his major customer KLM wanted to open negotiations with the Douglas company, he acquired exclusive European DC-2 sales rights.

Always a practical man, he turned out to be the best sales man his worst competitor could have wished for. Profits from the DC-2's and later DC-3's he delivered to a number of airlines all over Europe gave him the chance to get his own manufacturing capabilities up to date. But despite various designs that were put forward, it would take some twenty years for the company to return to the production of civil aircraft. The ever growing tension in Europe led to a sudden demand for military aircraft, and Fokker jumped at the opportunity.

Of course, it was only a temporary solution, and it came at a heavy price. Tensions turned into war, German armies swept across Europe and after their occupation of Holland in May 1940, they used the Fokker facilities as a Luftwaffe repair shop. Anthony Fokker himself didn't live to see the hostile take-over of his company. Aged 49, he had died in a New York hospital on December 23, 1939 from the complications of a relatively minor nose operation.

When the war finally came to an end, the company had to be resurrected without the man who had founded it.But then, it is unlikely that Fokker could have played the same role he had after the previous war. In fact, during the last years of his life, he had increasingly turned away from the burdens of management, leaving men like Stephan, Van Tijen and Seekatz largely in charge of his company.

The pioneering years were over and thus, so was the age of men like Fokker. Individuals could no longer shape the future of the aviation industry. The sense of adventure and an almost instinctive technical insight were replaced by balance sheets and wind tunnel data.

The civil aircraft that were produced after the war, the models F27 Friendship and F28 Fellowship, clearly reflected this change. They were never stars, but rather dependable workhorses that would quietly go about their business in numerous countries all over the world and will probably continue to do so well into the next century.

Their successors, the F50 and F100, were introduced in the late Eighties. The largest export order in Dutch history, the sale of 75 F100's to American Airlines, briefly hinted at a return to the golden days of some sixty years earlier. At one point, the Fokker company employed more people than the civil aircraft division of McDonnell Douglas.

But its sudden growth also made it very vulnerable in a highly cyclic market. In a few short years the dream turned into a nightmare. Already largely indebted by the simultaneous development of two new aircraft, losses incurred by the combined effects of an all-time low in the exchange rate of the dollar and an unexpected drop in the demand for aircraft proved unsustainable.

In 1997 the last airliner to bear the name of Fokker was rolled off the assembly line at Amsterdam Airport Schiphol. It marked the end of a tradition whose origins could be traced back to the earliest days of aviation.


Your suggestions or comment are welcome. Send your e-mail to Leo Bakker